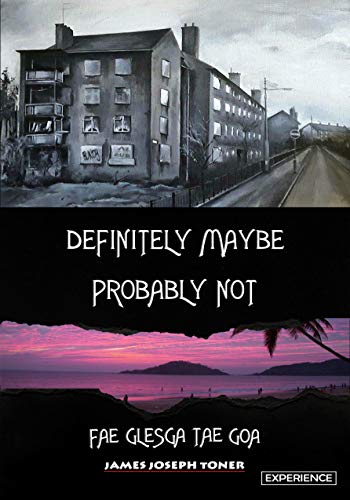 I’d followed James’ story through my sister who knew him via work so I was intrigued to find out he was writing a book about his time stuck in the Indian legal system. Thanks to James for the advanced review copy of “Definitely Maybe, Probably Not: Fae Glesga Tae Goa”

Growing up on the rough streets of Castlemilk, James Toner found himself drawn to the worlds of drugs and crime. But from an early age, alcohol was the drug that had its claws firmly into the young
Glaswegian. And it was alcohol that led to his frequent brushes with the law. Rising from petty crime to being a bagman for various dealers, James operated on the fringes of society, riding the Ecstasy wave of
the late 1980s into cocaine addiction in the 1990s. But two events would change his life forever. The first was his brother’s brutal murder in 2004 which shattered the newly found life of normality he had
worked so hard for. The second took place when trying to escape the stress and aftermath of that murder. Leaving Glasgow and all its problems behind, he fled to his beloved Goa, a destination he had
been visiting for many years. There, when carrying out what should have been an everyday pickup of hashish for him and some friends, he found himself set up by the local police and his supplier. What
followed was eleven months on remand in the hell of Indian prisons, then a 3-year period of limbo as he found himself trapped in the maze of the corrupt and complicated Indian legal system.
At times tragic, at others humorous, this is the true story of one man’s journey through life and all the hurdles he faced. More importantly, it’s a story of realisation and recovery, one that can inspire anyone who has battled drink or drug addiction.

James starts his book with a searingly honest appraisal. He makes it clear that he blames no one apart from himself for the bother he got himself into, nor does he blame his surroundings. Growing up in a Glasgow scheme, it would be easy for him to look for others to lay the blame at but he doesn’t. He promises an honest reflection on his life, one that he admits is full of contradictions but you know what, it’s that that makes us human! If we don’t reflect and learn, change our beliefs and repeat this over and over, how on earth do we grow and develop.

From the 1970s where the economy was in turmoil James and his family moved to South Africa. Returning to Glasgow following the sudden death of his father James found himself at 10 years old, expected to take on the role of an adult. The 70s didn’t afford children grief counselling and understanding, and in the West of Scotland, you were very much expected to get on with it. We follow James’s life growing up in Castlemilk where choices and life experiences led him to where he is now.

Brutally frank, refreshingly honest, scathing of the politics and policies of Thatcher’s reign, James takes no prisoners as he leads the reader on a dark journey. Peppered with the infamous Glesga humour and the harsh narrative of the streets the language used is authentic and it may not be for those who are easily offended.

The narrative jumps around, not necessarily flowing as in a traditional novel but this is what gives it it’s authenticity, this is what makes it so brutally real. You could almost be sitting with James in the pub listening to him tell his tale. It might be easy to criticise the book for the grammatical messiness and the lack of traditional storyline structure, however, James never set out to provide us with a polished up version of his life, he promised the reader the real story and this is exactly what you get. Without this, it would not have been James’ voice that you hear throughout.

We see where James had chances to make things right and if things had taken a different path he might not have written this story. The murder of his younger brother Martin in 2004 sent him on a journey to escape the dark streets of Glasgow to his beloved Goa and ultimately to what might be considered years of hell. It is not a pretty picture painted of life behind bars tangled up in a mass of police corruption, nor is it meant to be. There are points where you might recoil in horror but probably the most poignant part of the story for me was James’ call to his mammy back in Glasgow to tell her he was in an Indian jail on drugs charges. I could almost hear the resignation in her voice and I shed a little tear for her myself.

Growing up in Glasgow in the 1970s and 80s I can definitely confirm that this book is a realistic account of life back then. It isn’t pretty, nor is it perfectly polished but it is a brutal and raw story of part of James Toner’s journey to where he is now.

This is the first part of his story and he is working on part two and it is well worth a read!

“Definitely Maybe, Probably not: Fae Glesga tae Goa” is available to purchase from: